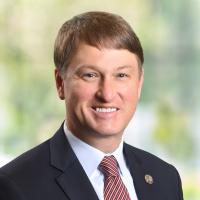 Join the Augusta Metro Chamber on Tuesday, April 26 for the first Member Economic Luncheon of 2022. The luncheon begins at 11:30 am in the Oglethorpe Ballroom of the Augusta Marriott at the Convention Center.

Keynote speaker Pat Wilson, Commissioner of the Georgia Department of Economic Development (GDEcD) and JAMES Magazine 2022 Georgian of the Year, will give an update on Georgia's Economy, including an overview of current job creation efforts and investment opportunities throughout the state.

Mr. Wilson is responsible for leading the GDEcD team in planning and mobilizing state resources for economic development. Under Governor Brian P. Kemp and Commissioner Wilson’s leadership, Georgia has been named the No. 1 state in the nation in which to do business for the eighth consecutive year in a row. GDEcD was also rated as the nation’s best state-level economic development organization by the International Economic Development Council (IEDC) in 2017.

Mr. Wilson previously served as Chief Operating Officer of GDEcD from January 2011 until his appointment as Commissioner by former Governor Nathan Deal. As COO, he managed the daily operations of the agency, directed long-term strategy, managed the agency’s legislative priorities and served as the department’s liaison with the Georgia Congressional delegation and federal government partners. In addition, Pat served as Executive Director of the Georgia Allies. Mr. Wilson joined GDEcD as Deputy Commissioner for Global Commerce in 2010.

“The Art of Customer Care Post-COVID” with T-Mobile at Chamber’s Third Thursday Business BuilderApril 15, 2022 All About the Mission - April 13April 13, 2022